Once again I will be joining other members of the tribe to share some “Jewish Humour” at Aqua books next week. Fellow Jewy theatre types Michael Nathanson and Daniel Thau Eleff will  be there as well. You can find all the details here, but you will have to show up to find out what I am reading…because I don’t know yet.

Here’s a question: do Jewish writers pigeonhole themselves by identifying that way? And do I automatically identify myself that way by agreeing to be a part of an evening of Jewish Humour? And what is “Jewish Humour”? Is it all about running the world bank and shit?

Hi everyone! I have been immersed in Winnipeg as the Cultural Capital of Canada 2010 project. If you haven’t heard about that yet, check out our website.

In the meantime, I will be improvising with Crumbs on Tuesday, November 30th as part of their Crumbs and Friends series. It will be me and the magnificent Trish Cooper and magnanimous Sarah Constible. Should be a rocker, so if you are in town, don’t miss it.

We were very excited to see a spread about our wedding in the Winnipeg Weddings magazine. You can find the article and some great pictures on their site, Winnipeg Weddings. Here are some excerpts. 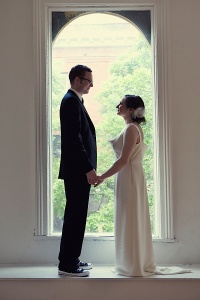 The New York gal fell in love with Jason’s humour, and the Winnipeg groom credits Alix’s supportive nature as her best quality: “Alix always makes me feel good about the life I have chosen.” One morning while eating breakfast at Fresh Café, Alix proposed to Jason over eggs. 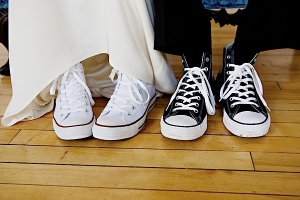 Alix wanted a simple yet beautiful dress, and she also wanted it on a budget. Ordering online from J. Crew, she chose a classic sheath with a delicate scoop neck that she dressed up with lace from her mother’s wedding gown.

Alix’s advice: “Plan your wedding together as a bride and groom. It’s so much fun to see a shared vision come to life.”

I will say, that I regret saying “bride and groom” since not only men and women marry, and those words imply male and female. You can read more about the article and my musings on getting married at feministwedding.wordpress.com

Neither I nor my HUSBAND Jason have a show in the fringe this summer…so look for us in audiences as spectators or at the beer tent as drinkers!

In the mean time, here is a view of what I will be working on all summer. Check out more at our website, artsforall.ca

Another great review, this time from The Uptown. You can read the whole review on their site (its under the Habitat review, also a great show), and here are some great lines, excerpted below.

Sobler, as playwright, has a fine time exploring the intricacies of the father/daughter dynamic…we get to laugh out loud and also contemplate a thing or two about our own sense of family…these characters ooze genuine humanity…Kash and Sobler make a dynamic father/daughter duo. And while it comes as no surprise Sobler is perfectly cast as Rebecca, Kash is equally as wonderful as her father. It’s almost a shock to realize they’re just acting. 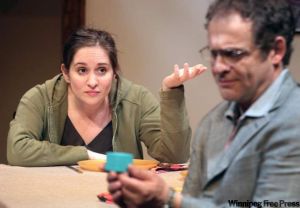 Some Things You Keep got a great review from the Free Press this weekend. You can find the whole review on their website, but here are some highlights. NOTE: My dad has visited me once! And now he is coming in for the show!

In Alix Sobler’s sparkling new comedy Some Things You Keep, transplanted New Yorker Rebecca is still smarting about her father’s five-year-old reluctance to visit her new home in Winnipeg… A familiar face from many Winnipeg Fringe Theatre Festival productions, Sobler is impressive her character manoeuvres through the tricky emotional minefield that is her relationship with her father, played by out-of-towner Daniel Kash…Sobler’s first full-length play proves a keeper, successfully creating real people out of her odd couple with enough substance to cast long shadows alongside the jokes.

After a terrific opening, Some Things You Keep received a glowing review from CBC’s Joff Schmidt! You can find the whole review here: CBC review

Here is an excerpt for your enjoyment.

These are heavy themes: the difficulty of dealing with family, parental expectation vs. asserting independence, coping with loss – but Alix Sobler’s script deals with them all with an eloquent style and wit….we’re never too far from a good, quippy one-liner – none of which detract from the genuine, deep emotional core of the story.

ight, and upon reflection, the Venti coffee this morning was probably not a great idea!

There were two preview articles about the show today, in the Winnipeg Free Press and The Uptown.  You can find the full articles on their site, but here are some highlights:

From the Free Press:

“This play I think explores our best and our worst when we are together,” says Sobler, who will no doubt add some authenticity to the role of Rebecca by playing her in the WJT season-ender.

“I obviously relate to this character. It’s not a massive stretch for me. It was a chance to be on stage saying a bunch of things I want to say.”

WJT artistic producer Michael Nathanson, who commissioned Some Things You Keep, is a fan of writing where a real-life incident spurs a dramatic exploration.

“Alix’s writing is very much like Alix is as a person,” Nathanson says. “It’s very charming, it’s funny and it’s smart. It’s got attitude in a good way.”

Sobler’s latest play, commissioned by WJT and making its world premiere there this week, is Some Things You Keep. It tells the story of Rebecca, a New Yorker transplanted to Winnipeg, and her father, who makes his first visit to see Rebecca, five years after the death of her mother. Sobler has more than a passing resemblance to Rebecca — and not just because she plays her in the two-person show. Some Things You Keep is definitely in keeping with her recent style of work.

“This play, I would say, although I have had plays where I actually get on stage and I play, literally, myself… this play is not directly me, but it’s probably my most personal piece,” she says. “There are liberties taken, poetic license, but the relationship is drawn directly from a relationship in my life, and that’s my relationship with my father.”

You can get tickets at the WJT site.

I am very excited about my upcoming project, and my biggest to date. This play was commissioned by Winnipeg Jewish Theatre in 2008, and I have the honour of also being in this production.  You can visit the WJT site to find out about how to get tickets.

A daughter in Winnipeg. The father from New York. The comic misunderstandings that come with distance and time and family.